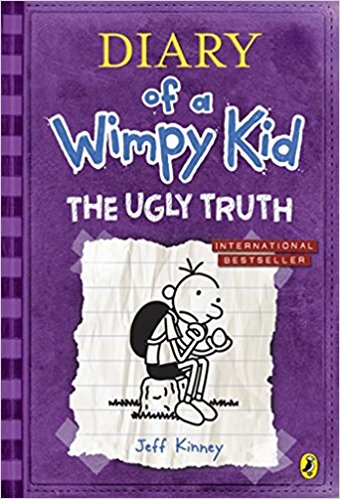 'I laughed, I cried, I smiled, and I pondered throughout the entire book. You know you just finished reading something great when you get towards the end and you start to panic because you don't want it to end.' Sam, Diary of a Wimpy kid fan Dive into Jeff Kinney's fifth instalment of his rib-tickling and bestselling Diary of a Wimpy Kid series. I'm in the market for a new best friend. The problem is, I invested all my time in Rowley, and I don't have anyone lined up to take his place. Greg Heffley has always been in a hurry to grow up. But is getting older really all it's cracked up to be? Suddenly Greg is dealing with the pressures of boy-girl parties, increased responsibilities, and even the awkward changes that come with getting older. And after a fight with his best friend Rowley, it looks like Greg is going to have to face the "ugly truth" all by himself . . . Filled with brilliantly funny cartoons, 7+ readers (including reluctant readers) will devour Jeff Kinney's award-winning books. 'Daughter loves Greg and his diary, she finds it so funny... I would imagine [it's] great for reluctant readers. I love hearing her suddenly laugh when reading, it's a pleasure.' Praise for Jeff Kinney and the Diary of a Wimpy Kid series: 'The world has gone crazy for Jeff Kinney's Diary of a Wimpy Kid series' - Sun 'Kinney is right up there with J K Rowling as one of the bestselling children's authors on the planet' - Independent 'Hilarious!' - Sunday Telegraph www.wimpykidclub.co.uk