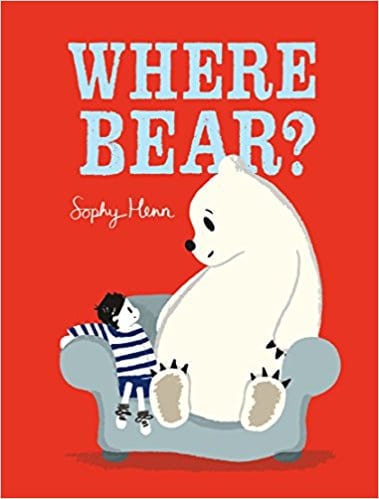 From School Library Journal K-Gr 2—A cuddly, white cub lives with a little boy in a home in which retro furniture and telephones with cords suggest the mid-20th-century. When the animal's size quickly outpaces the boy's (and the scale of the house), the child sets out to find a new habitat for his friend. The titular question becomes the narrative engine for a series of spreads taking the duo to places ranging from a toy store and zoo to the circus and jungle. Nothing suits the bear, until they arrive at the Arctic. The controlled palette for each spare composition relates to the changing colors of the (mostly solid) backgrounds. The boy's navy shorts and blue-and-white striped shirt are constants as are the white curves of the animal. Their friendship survives the distance, and the bear proposes a new trip together, setting up the boy to ask the question one last time. This pleasant but not distinguished foray into picture books by a British art director is strong on design but a bit short on sustaining narrative interest. With the exception of the circus scene, the bear is a static figure—either sitting or standing—in each new situation. The narrative wears a little thin, with no dramatic tension, action, or climactic rise in the plot or visuals to enliven the repetitive text.—Wendy Lukehart, District of Columbia Public Library --This text refers to an out of print or unavailable edition of this title. Review Praise for WHERE BEAR?: * "[N]othing short of magnificent. Each page is absolutely charming and begs to be looked at again and again."–Library Media Connection, starred review "[A] winsome debut . . . The catchy refrain, 'Then where, bear?,'and Henn’s sophisticated matte-toned illustrations make for a zippy take on the 'finding your place' genre."–New York Times Book Review "This gentle tale about friendship and home will give early readers and their grown-ups plenty of food for discussion."–Kirkus Reviews "Simple illustrations in bold colors allow the bear’s repertoire of expressions — chagrin, boredom, and terror — to take center stage."–Boston Globe "[C]hildren will gravitate to the rhythmic repetition and the graphic design. A notable debut."–Booklist --This text refers to an out of print or unavailable edition of this title.